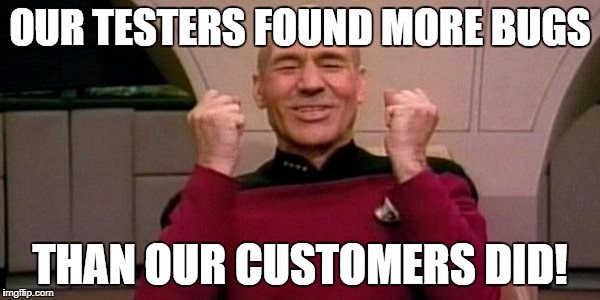 The user is the Ux designer’s best friend. And sometimes, his biggest nightmare. But we have to work with them and do user tests, because, as a designer, we are so involved in our project that we are not impartial anymore. It’s like kids. As a parent, your kid is always the best looking and kindest kid in the place, even in the world. (Nope, they’re not!) Well, with a design, it’s exactly the same. And it’s always good to have someone to remind you that not everything is awesome. So, the user’s feedback is very important, but let’s be careful with it.

We’ve all had that meeting with the business team, the IT guy, the BA and marketing, to present the project you’re working on. You present your idea, or your prototype, and you know your idea is great. Well, it’s your job after all, you’re the « expert ». And as such, you did your best to simplify the functionalities and to offer the best possible design experience. You know exactly what works and what doesn’t, but you had to adapt a few requests from the business team in order to offer the best experience to the end user. This is when you start facing a big problem: the business analyst. He received specific requests from management and the board, and he did his best to put everything in a nice excel sheet and to define a very specific scope.

Yes, so what? Well, you kind of change his initial plan, and things will need to be validated during this meeting. And you know that this will never happen. Because no-one wants the responsibility to take a decision. This is why « Validation meeting » is a myth! It’s at that specific moment that you have that question: Did we test it with users? What did they say?And to answer that, you will need metrics and digits.

They will even put a whole excel file in a PowerPoint slide so you understand how important it is for the project. Why? They invested a lot of time in defining a functionality they thought was important for them. So telling them the user doesn’t care about that won’t be enough. They will need more than just your word to throw that away. They will need to hear it from the user himself. Because the user is always right, right?

Which brings me to my first point.

1) The user is a human being

So, nope, the user is not always right. And in order to understand that, you need to understand the user’s mindset when he’s at your place testing your design. In fact, he’s on mission, a real quest. And sometimes, you’re even paying him for that. You asked him to give you his opinion, and a list of improvements, and he will give that list. Because if he doesn’t, he might look stupid or useless, and nobody likes to feel useless. So, you will start receiving a full list of remarks. And if some of them are very constructive, you will also hear a lot of things that are not. This is why I NEVER invite the people from the business department into a user test. Otherwise, you will spend time redoing your design again and again, adding things that only one in a hundred guys care about.

The human brain is a fantastic machine, for many reasons. We all had that time when we saw someone from far away, thinking he’s a friend, waving your hand at him, to finally realize he’s in fact a total stranger. It might sound embarrassing, but in fact, your brain is just trying to match things with what you already know. This is the way he works. Well, the user will do the exact same thing with your design. He will compare your proposal with what he knows, or what he’s currently using. And this is why nowadays, web design has become so boring. All the websites are the same. We listen to the user, and we adapt what we do to please him. But as Henry Ford once said, if he had listened to his customers, we would have faster horses. It is because we always try to stay in our comfort zone. That’s the reason we always take the same dish at our favorite restaurant. You might spend ten minutes checking the menu, but you always go back to what you know. Does it mean that the rest of the menu is bad? Nope. It just means that if you have the choice, you will always play it safe.

So, if you’re proposing something new and innovative, you will need to observe and to listen carefully in order to understand and to properly filter the user’s feedback.

I always try to have a very simple scenario. The last test I made was very simple: I wanted to test a navigation. So, I opened the homepage, and I just asked the users to change their phone number. In order to do that, they had to understand the navigation, the labels, to navigate through their profile and settings, and to find the place with their phone number. This simple question gave the users the destination. So their brain was focusing on it, while I was observing the journey. It’s a little mind trick. But the feedback was interesting: for some of the users, the color of the field was weird. For others, the size of the typo was too big, or too small. I even had one who told me the label was confusing. By the way, the label said « my phone number », and he thought it was the website’s phone number because he thought the website was talking to him. Either way, they all managed to find the field and to complete it. And for me, the feedback was very good, because I was testing the navigation, not the phone number field. And no-one complained about or had any remarks about the navigation. So the test was a success.

Sometimes, I have to adapt my designs. Things I thought were really clear, were in fact not obvious at all. So, with my designer, we have to rethink a few things. When it’s done, I organise a new series of tests. I invite new users, but I also call users I already had. Why? To have feedback about the « Learning Phase ». A new thing can be scary, and we often find it more complicated. When you bought your new car and had to enter an address for the first time in your GPS, it was not that simple. But today, you could do it with closed eyes. Which is not easy when you’re driving, I totally agree.

What’s important to me here, is to know if there is an evolution in the way the user uses the platform or the app. If the second time, he’s running through the app as fast as the roadrunner, then we’re good. It means that what was unusual for him the first time became something natural and logical to use. It’s the learning phase. And if he still struggles to do the job, then you might have a problem. In fact, in my case, I take the second round as a validation

I always start the test by proposing something to drink. I tell the user that while I’m preparing his drink, he may already have a look at the prototype we’ll be testing. So, I give him a few minutes to discover the tool, and I’m not there to see it. But it doesn’t matter. He will do what we all do when we go for the first time on a new app or website. We test everything. This allows me to check the friendliness of my design. If your design is indeed user friendly and intuitive, the user will play with it naturally. It’s a matter of feeling at ease. Because the user will never have the feeling that he can break something while you’re not there. And this is very important, because once your design is live, you won’t be there sitting next to all the users. They’re on their own. So they need to feel comfy in order to dare using your tool. If your design is overcharged or too complicated, they will wait for you to be back with their drink, waiting to have the right instructions.

Of course, there is a lot to say about user testing. And there are a lot of different tools to do it. Eye tracking, mouse tracking, etc… But it would take me a whole book to explain everything.

I would just finish by saying that you really need to be careful with user tests. Of course it’s important and useful, and I’m not saying we should stop with user testing, but it shouldn’t be as big as it is today. We are so focused on the user feedback that we don’t dare to innovate anymore. We know what works because it has already been tested. But when you think about it, if you had to test a table, you would have a lot of feedback about the size, the table’s feet, the height, or maybe even the chairs.

You will be able to innovate when you realise that the user doesn’t want a table, he just wants a place to eat.